Skip to content
Capos > research > Areas > Military > The role of the army and its economic impact, before and after 1989 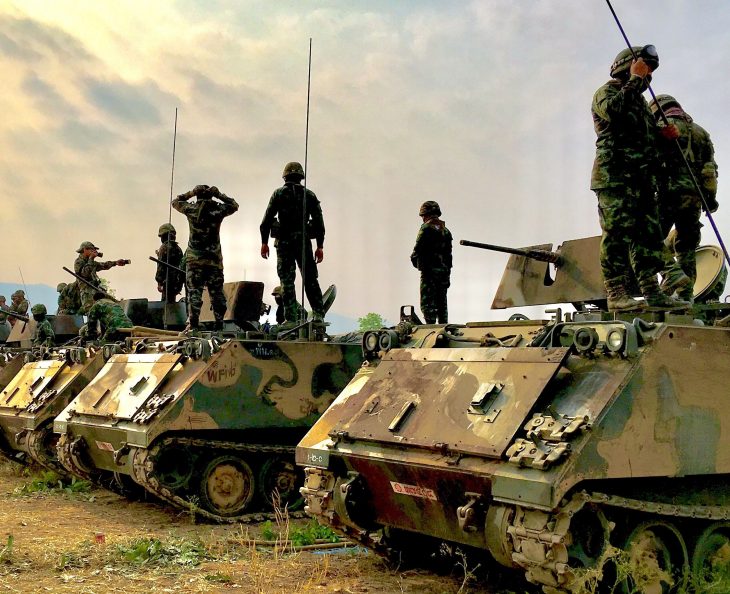 The establishment and consecration of modern armed forces can be temporarily placed in the latter second half of the 19th century, following the revolutionary historical evolutionary process from1848, of the creation of the modern Romanian state by the Union from 1859 and the execution of reforms and military policy of the ruler Alexandru Ioan Cuza. It is the period when it was decided introduction of the uniform and unique equipment, as well as the allocation of about a quarter of the budget the country for military expenditures. One of the main concerns of the ruler was the production within the country of the necessary weapons for the army, this way beginning the foundation of enterprises that, shortly, would produce the first weapons and ammunition made in Romania.
In 1859 there was already a gunpowder factory in Târgoviște, repair weapons shop in Bucharest and some rotary, woodworking and locksmith workshops in Moldova. After ten years, in Bucharest, the pyrotechnics workshops of the army were built, and at the Stables artillery from Dealul Spirii, Alexandru Ioan Cuza followed the technological process of casting projectiles.
The first Constitution of Romania, adopted in 1866 under the reign of King Carol I, was elaborated without foreign intervention and without external approval, becoming an act of manifestation of independence – ignoring the Ottoman suzerainty and the collective guarantee of the 7 big ones powers – while also providing the context for the evolution of the Romanian state on a modern and democratic basis. Following this, a package of laws was adopted that provided the appropriate framework for the military system development. Proclaimed by the Parliament of Bucharest on May 9, 1877, the independence of Romania as a state was to be strengthened by the participation of the Romanian army in the Russo-Turkish War, the first large-scale armed conflict in the modern era of our military history.
Although the process of dismantling the great empires, correlated with that of the formation of national states, required the development of a defense industry at the beginning of the twentieth century, that allows the proper equipping of the army, it did not happen. Therefore, in August 1931,The General Technical Inspectorate of the Army has prepared a “Report on the current state of the national defense training from the point of view of war munition”of the Romanian state, by comparison with the situations in Czechoslovakia and Poland, where he carried out a comprehensive analysis of of the efforts made in the development of the defense industry in all three countries. Thus, Poland, being in a political and diplomatic context similar to Romania, it held in 1931, “an industry of complete war “, having” factories in direct connection with the war industries, which were created or reorganized by and for the purpose of serving this industry ”. Also, Czechoslovakia it had a similar situation to the Polish state. Romania, from this point of view, was located”Exactly in the same situation as it was 15 years ago”(ie 1916). The document also shows the ways to follow so that”War industries be considered an intangible chapter, deducted even before the public debt coupon. ”
At the same time, in March 1931, the General Secretariat of the Ministry of the Army prepared the report entitled: “Considerations on the material preparation of the national defense”. In the document content it is shown that the First World War “raised to an axiom rank the need that, in order to ensure national defense, in the country, it must exist industries producing material the army needs in wartime ”. The authors of these “considerations” were obliged to find, “with regret ”, that after twelve years since the Great Union, Romania“ has not achieved anything for achieving this goal of vital importance for our national defense”.

The analyses carried out determined the elaboration of a program by which it was intended for the development of industrial capacities to the extent that they could be able to satisfy the needs of the army. The process of re-arming Romania was to be carried out through the modernization and standardization of the existing equipment, by using the national weapons industry – existing in an incipient phase – by acquiring licenses and implementing them in companies within the country, as well as by importing those elements that could not be produced in the country. This process was largely assisted by Czechoslovakia, whose weapons industry provided about 70% of the total imported weapons. The process of Czechoslovak infantry weapons production(rifles, machine guns, and machine guns) and divisional artillery pieces were assimilated in a small extent, an important role in this action being attributed to the CopşaMică-Cugirfactories.
According to the program – formalized, in 1935, in a re-arming plan -, an important role was held by the development of the Romanian aeronautical industry, which during this period started manufacturing several types of aircraft, focusing on the military training, reconnaissance, hunting, and bombing aircraft. At the Romanian Aeronautics Industry (IAR), starting from 1934 to 1939 were manufactured own conception airplanes and also some based on the license obtained from the Polish company PanstwowoZakladyLotnicze (PZL). At the Society of Technical Exploitation (SET), the second-largest enterprise in Romania has launched orders for reconnaissance aircraft, the necessary engines being produced at IAR.
The Romanian industry did not produce ships for the military, but the existing ones were repaired /maintained in the docks in Galați.
With all these efforts, most of the endowment of the Romanian army was still imported (Czechoslovakia, France, Germany), and by the beginning of the war, the re-arming program was reduced.
After the Second World War, Romania became dependent on the Soviet military equipment until 1968, when, following the events in Czechoslovakia, it was taken the decision to accelerate the development of their own production capacities. In ten years, the defense industry provides all the necessary equipment and materials for the army, becoming an important exporter.
Before 1989 the staff in the defense industry gathered around 200,000people, and Romania exported weapons which, during the peak years, worthed about $ 1.5 billion. In the1989, the value of exports increased to 700 million USD.
After 1989 Romania signed the Wassenaar Agreement regarding the conventional arms, as well as other agreements related to the control over the military exports, which forced the defense industry to give up the markets considered illegal or one part of the traditional trade partners that were subject to UNO, EU or NATO sanctions. Also, as a result of the resizing the armed forces from 300,000 soldiers to about 100,000, the internal market diminished considerably.
In the 2000s, the products exported by the Romanian companies became insignificant as volume and value throughout the economy. However, the most profitable product was the submachine gun –with a 7.62mm caliber, sold for over $ 100 per piece. In 2001, the Romanian industry defense exported weapons or strategic products only in three states: Turkey, India, and Pakistan.
From 1994 to 2011, the Romanian defense industry exported most in 1995 – $ 167.7 million, the year 2001 being the lowest in the volume of exports, with a total value of only 24.6 million USD. Between 1996-2000 our country has ranked 40th in the world as an exporter of military products.
In previous years, the Romanian army chiefs have repeatedly stated that the situation of endowment with fighting equipment and technique is far from optimal, at least 65% of them being outdated, as most of them were produced before 1990. The soldiers and decision-makers from defense and National Security Institutions have publicly reported on various occasions about the accelerated decline of the capacity to defend the territory, mainly due to the chronic underinvestment in the field of the defense industry. Also, in the Romanian Parliament, the Government and The presidency it had been many discussions but lacked a satisfactory purpose. Some Examples may be eloquent: air defense is provided by less than 40 fighter jets MiG-21 LanceR, the anti-aircraft defense is mainly provided by S-75 Volhov missiles (SA-2, Soviet production and the Kub system (SA-6), both designed in the mid-1960s of the last century Soviet design offices.
In 2013, Romania signed, at the UN, the Treaty regarding Trade with Arms (Arms Trade Treaty – ATT), the first international legal instrument that regulates this field globally. The ATT imposes severe obligations on States Parties, including express prohibitions for conventional arms transfers. As an effect of this type of treaty, and the reduction of military staff number and the modest amounts allocated by the Government of Romania during the fiscal years 1990-2014, the weapons production sector, obviously oversized by the end of 1989, it had steadily decreased by decreasing the number of orders and the technical unemployment of qualified staff.
The lack of internal and external orders led to the compression of the entire defense industry. This situation was manifested mainly by closing and preserving some production lines from weapons factories. Because it has not found solutions to restructure the weapons industry, the Romanian state has spent annually significant amounts with the payment of salaries for those in technical unemployment and compensatory salaries for those who left the system. The amount charged for these expenses it shows a value of over $10 billion from 1990 to today.
Besides all these issues, better cooperation and commitment are needed to ensure responsibility at European level, more investments in military capabilities and strengthening the European defense industry. The Smart Defense concept can help optimize defense and also the way in which are produced and distributed the materials and the fighting technique. A common strategy with a strong correlated and unitary coordinated endowment component is, most probably, the next step in achieving the common European defense. Compared to the US, EU states invest insignificantly in research and development technologies with military application. If this situation continues, Europe will not be able to guarantee its own security by relying on its industrial power.