Even if almost 12 years have passed since Romania joined the European Union, our country is still trying to reduce the gauge of the important indicators in relation to the Union averages. We have been struggling since 2007 to get closer to the other member countries, but unfortunately we have only succeeded in overcoming, at some point, Bulgaria, with whom we share the last two places in most statistics that involve elements relevant to the standard of living.
After a long period of recovery, as a result of the economic crisis that started in 2008, Romania’s economic indicators recorded values that, for a part of the political leaders, are a real success. However, it is our duty, as analysts, to properly assess and anticipate the danger behind apparent gratifying figure. Thus, we will compare a number of relevant indicators for determining the effective standard of living and to establish whether a single indicator (in this case, economic growth) can be decisive for illustrating the state of the economy.
Before discussing any kind of indicator, we have to agree on what it means in the given context. Concretely, the standards of living means, according to the Cambridge Dictionary, the level of comfort that people in a particular social class, country, etc. have or the quantity and type of products and services they can buy. As a consequence, the premise that Romania’s standard of living is improving should be based on indicators such as purchasing power, inflation or net average wage better than economic growth.
This is also evidenced by the graphical expression of the evolution of these indicators: 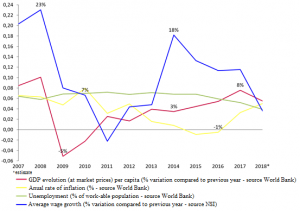 The main conclusion of the chart is that an increase in the gross domestic product per capita (GDP per capita) and, implicitly, in economic growth (accelerated or not) does not automatically translate into real wage increases or increases in purchasing power. There are situations (such as the 2014-2017 period) when indicators such as net average wages can slow down their growth despite an upward trend in GDP per capita. At the same time, inflation may cancel an increase in net wages, as is the case of the year 2010 (the 7% average net wage was practically canceled by inflation) or even exacerbated by a decrease, as it did in 2011. It is important to look at the overall picture, inclusive and relevant to the entire economic environment. If for 2011 only the change of GDP per capita of +2.53% is mentioned, it can create the feeling of healthy growth, even close to the potential. If, however, other indicators such as wage growth, unemployment or even investment levels are added, the conclusion may well be different.
This does not mean that it is not appropriate to look at GDP developments carefully. However, we need to make the difference between the potential GDP (ie the one that a country can achieve in a sustainable way) and the real one. 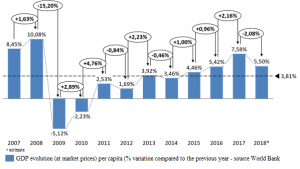 The evolution of GDP/capita illustrated above shows that in many cases both the increase and decreases of this indicator was achieved at marginal values far from the average. The consequences of positive gaps, such as 2007-2008 ones and possibly 2016-2018 ones, may be real disasters, such as the 2009-2010 crisis, when the economy declined by more than 7 per cent and most of the relevant indicators fell by a significant amount. 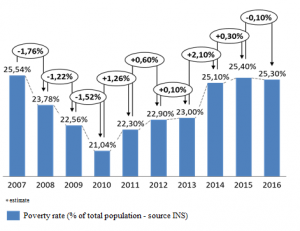 Last but not least, we can also discuss the „poverty rate” indicator, where the National Institute of Statistics include people whose income is so small that it is impossible to achieve a standard of living considered acceptable. These people face multiple disadvantages linked to unemployment, incomes, poor living conditions, inadequate health care, and barriers to access to education, culture, sports and leisure. With a brief look at the chart, we observe that practically one quarter of the country’s population is at this sensitive stage. It is a fact that the number of people living in poverty has steadily increased since 2010 (the year before the exit from the recession) until 2015, and in 2016 (a year with a substantial GDP growth of 5,42%), the decrease of poverty rate was of only 0.1%.
However, we can suggest a series of indicators that the media and politicians speak less often, but which my aprove to be more relevant to expressing the true standard of living for Romanians:
• The degree of functional illiteracy: calculated as a ration between people who can not select the relevant information and can not make basic judgments and the total population studied. In 2012, the Organization of Economic Cooperation and Development (OECD), the organizer of PISA tests, calculates this indicator for 15-year-olds at 42% for this catehory, at the same level as Bulgaria and a little below Thailand, Armenia or Kazakhstan. Functional literacy (a component that should be prioritized in any contemporary education system) can be in a relationship of direct proportionality to workplace performance and, implicitly, to population incomes and improved standard of living.

• Life expectancy: calculated as the average age a newborn is expected to live while maintaining the current mortality pattern. This indicator is relevant due to the close link between the standard of living and the population’s health, which ultimately leads to an improvement or worsening of life expectancy. Not by accident, countries with the highest standard of living (according to the Social Progress Index, which takes into account three main pillars – basic needs, wealth foundation and opportunities) rank among the top five countries with the highest life expectancy (Switzerland – 82.9 years, Australia – 82.5 years, Denmark – 80.7 years, Canada – 82.3 years and Finland – 81.7 years). By comparison, life expectancy in Romania in 2016, according to the World Bank, was of only 75 years.

• Poverty rate – whose calculation methodology is mentioned above. This indicator may fall under the „basic needs” category, taking into account that people below this threshold have incomes below the minimum requirement for decent living.

Although these indicators do not fully address the issue of living standards, the conclusion of this brief analysis is clear: the decline in wealth or, at the same time, the improvement in living standards is related to a different type of variable than the economic growth indicator. In addition, there is the real possibility that the intemperance of decision-makers and the irresponsible run after illusory performances might cause not only economic crises, but also visible diminishments of the general well-being.
The solution? Identifying a potential level of economic growth (a good starting point could be the average of +3.81% of the last 11 years) and the use of the means available to decision-makers (fiscal-budgetary and monetary) for creating economic policies for an anti-cyclical approach: warming up the economy in case of negative trends and cooling it in case of positive trends. Last but not least, focusing on controlling indicators that are much closer to the population (such as those mentioned above) instead of cold and less relevant figures (such as GDP) may prove to be an effective method in assessing government outcomes.
12 years after Romania’s accession to the European Union, It is time for responsibility, sustainability and respect to become words of order for decision-makers. They must abandon vanity and pride and support the sustainable construction of a healthy economy that, paradoxically, besides the obvious positive effects for the population, can even bring politically benefits in the medium and long term.