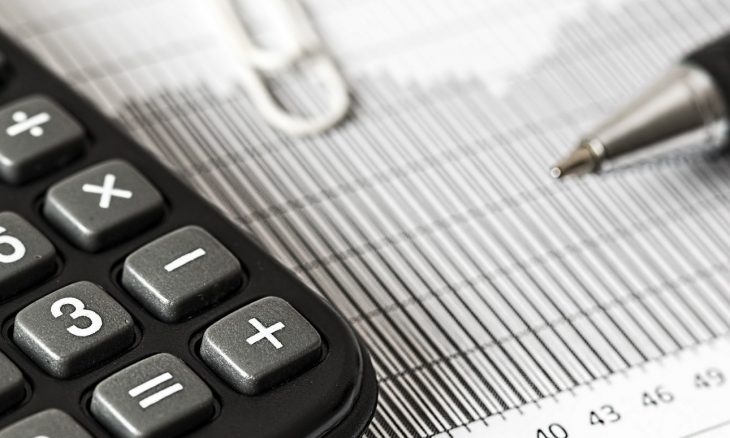 In today’s market economy corporations tend to be dynamic when it comes to their structure, size or object operating activity. Thereby, there is a large number of companies that merge or acquire other companies from the same country or from different countries, either through negotiations, or the stock market. This mechanism and the transactions they do are circumscribed by what is called the “acquisition and merger market” or, the M & A market (Mergers and Acquisitions) in English.
Consolidated market economies are being restructured and they progress predominantly through acquisitions and mergers. Therefore, no company with international reach has ruled out the possibility of growth or development through the acquisition or merger with another market participant. It can be said that such operations have led to positions as world leadership by some companies.
The M & A market has some features that distinguish it from other markets and they point out only the discretion of the negotiations and the impact, often a major one, on those involved and on the local or regional economies. In order to see the influence of GDP on the M & A market, we took into account public data from the period 2007-2018. During this time, 459,862 of closed transactions were registered on the European market, with trading values of over € 38 billion. The most important transactions that were closed during this period were in sectors such as health, energy, industry, and telecommunications.
Unlike most of the countries in the European Union, where the communist period didn’t interrupt the natural course of the economy, in Romania, the acquisitions and mergers operations have slowly reappeared after 1990 and have gained some importance only after 2000. Before the crisis, the years 2005-2007 were considered top years for the M & A market. Starting with 2008 the M & A market has suffered due to the economic crisis, returning to previous values being difficult. Also, the mergers and acquisitions activity has been affected both in terms of number of transactions and trading value. The year 2010 has registered the smallest value of the market (EUR 0.9 billion – transactions with reported value).
In recent years, the Romanian M & A market has turned into a buyer’s market.
During the period 2007-2018, approximately 1,240 closed transactions were recorded among the economic sectors in which these have taken place, such as industry, health, technology, telecommunications, financial services, and banking services. The recovery of the domestic M & A market has been slower compared to what has happened on a European level but starting with 2011 an increasing trend has appeared. The number of closed transactions in 2014 exceeded the level before the crisis, with a market value of 2.4 billion euros. The year 2017, characterized by consultants as the best year for the M & A market, was a record year for the most important transactions, these ones ranging from 100 to 500 million euros. In 2018 about 100 transactions were recorded, from which 14 of them had a communicated value by at least 100 million euros, and the average value was 50 million euros.
Assessing the activity of a national economy over a certain period is done using economic indicators. Therefore, the Gross Domestic Product (GDP) is a synthetic indicator which reveals, among other things, the level of development. Moreover, the GDP is a macroeconomic indicator essential for statistical comparisons at a national or international level as well as at a regional level. To see the influence of GDP – in fact, the growth rate of the indicator – in the M & A market we have compared the variation in the GDP growth rate with two characteristics of the M & A market: the total value of transactions (Chart 1) and the number of transactions (Chart 2). 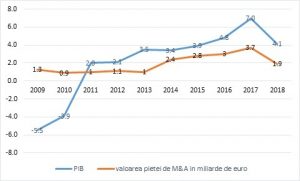 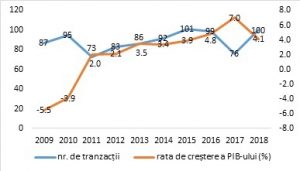 Data source: Eurostat; S&P Capital IQ
Chart 2: The evolution no. of transactions in the M&A market and the growth rate of GDP, 2009-2018

By analyzing the two charts, we can first conclude that the number of transactions is somewhat inversely proportional to the GDP growth rate , which highlights that there is a large supply of firms in the M & A market when the economy is in recession and a low bid when there is economic growth. Secondly, the total value of transactions is somewhat direct proportional to the GDP growth rate, this means that the firms are more willing to get involved into mergers and acquisitions, to invest, when the economy is booming.
Recently, Romania has had a positive GDP growth rate, which represented an
opportunity for acquisitions and mergers for the foreign investors. The investment effect is beneficial for the analyzed market, generating an ascending spiral effect being possible by maintaining a favorable climate to business development.